Lot's of light. I positioned four Nikon SB-900 flash units on the top of the tanks in this series of photos...with the exception of those noted.

As you can see from the photo below all four flash units are lined up on top, diffused and pointing straight down. If you look closely you can see how the flash (second from right) has a much larger base (diffuser). You can see how it more evenly distributes the light at the bottom of the tank. The other three are fixed with Gary Fong light spheres...a more conical beam of light. As with all of my photos I try and set up a "sweet spot" where I plan (hope actually) that the action will happen. The lights to the left and right of the larger unit basically help add a little more dramatic shadows...and a big part of that is just luck and second guessing what the fish will be doing and where.

Keep in mind that each of these flash units have the ability to light a subject twenty feet away. The SB-900 comes with a very cool zoom feature. For these shots I dialed in different settings for each of the units. One of the biggest problems I faced with this and most of my set up is being able to REDUCE the amount of light in the right amounts. SO throughout the shoot, I was changing settings on each. Where I can I will comment on those settings.

My favorite subject....the managuense. On this shot I actually cut all of the spherical diffusers by 85% and bumped up the larger. The nice even light really lights the blues in the fish. I wish it had a little more underneath....but...

You can actually make out where the two diffusers overlapped...lighting the head and back end of the body.

Every once in a while you get lucky with timing. On this shot I actually added a FIFTH flash from the camera head. Full disclosure the image had too much light coming into the front. I cropped very tight on the finished product to get this desired effect.

With all of my photography I try...whenever possible...to capture a bit of the cichlid spirit. Sometimes they cooperate...especially when they are breeding. Here's the female playing to the male near the breeding area.

The shot above where cropped to the two mouths gave me an idea. The male P. coatzacoalcos is always hiding in this ceramic log...looking out at me. I used the "fifth flash" on the camera. Most often the light (if any) coming from the camera is set to manual and goes out at about 1/128th power. In this shot it was set on full TTL power...all of the overhead flash units at about 25% power. The results were pretty dramatic. Without that front flash, all of those beautiful cyans and blues would be in shadow.

This is what happens when the best laid plans go awry. This shot of A. hogaboomorum was taken at the far left side of the lighting set up. The breeding female wandered into the space of the NON breeding male. Every time this happens that male will kick into "impress the bee-yatch" mode. The dramatic shadows add to the picture IMHO.

The other male doesn't take too well to the display and will rush in to retrieve his mate...making for some very nice action photos.

This set up worked great when I put it on one of the 300 gallon tanks. because of the depth, the added power/light worked great. Here's the Platinum Honduran Red Point...beauty in motion.

The female Paratheraps breidohri just outside the breeding area. The fish is about 7".

The male giving her a little attention...since she was nice enough to ask.

Last one...actually shot with the previous over and under lighting set up. Parachromis fredrichsthali. What I like about he photo is that you can see the beautiful fins and the lighting is such that it separates the fish nicely...giving that very soft even light from below.

Looking at your shots it´s easy to understand that there is alot of work involved. Especially when it comes to lighting. Also love the fact that there often is a story in your photos. 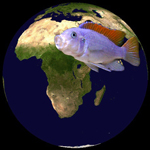 Thanks. Here's another post about the lighting set ups.

I wanted to try something different with the lighting set up. Here are the pictures that I shot yesterday. The goal, of course is to evenly light the fish without overly illuminating things around the fish.

Here's how I lit the tank. There are a total of four flash units on these shots. Not counting the one on the camera (set to manual 1/128th power)...here is the set up of the other three. Two Nikon SB-900's on top...one SB-800 on the bottom.

First it was difficult at times not to get a "hot spot" on the fish. It really was very dependent on how close the fish was to the bottom of the tank...and close to the flash. Ideally the fish should be equal distance (more or less) from all of the flash units. If not it was a matter of adjusting output through the camera's control center.

Second....because the diffuser would effectively "scatter" the light, I would invariably get some bleed over into the background of the tank. This was a tough one. I found a very nice and very inexpensive ($39) diffuser that does a great job. It is essentially a reflective sheet that attaches to the flash and allows you to "bend/fold/roll" the edges to fit your need. What I did was simply curve the back end so that it would cut the amount of light reflecting on the bottom.

I generally would put two flash units on top of the tank with diffusers. For this I switched out the normal diffuser that was more or less an inverted bell shape and replaced it with a Grsslon flash diffuser. If you take a look at this photo you can see how wide it is. The flash is pointed straight down through the diffuser. Inside the diffuser there are reflective light bellows that disperse and soften the light over a much wider area.

And finally I wanted to fill in the side of the fish with a soft light to cut the hard shadows. A big part of what I am doing relies on the set up....AND the participation of the fish. Basically I leave it up to the model to pick the pose. The reflective soft box flash unit did an exceptional job. The flash on the inside is on a rail and can be moved forward or back to give more or less light.

I am constantly tinkering with the light set up. All of my tanks are painted on the back with a "frosted glass" spray paint. It give them an opaque pebbled texture. Some of the tanks then get a flat black second coat. This combination does a great job preventing that reflective flair that sometimes comes from over spilling light.

I wanted to see what a little back light would look like and started by moving the umbrella toward the back of the tank and compensating for the front light by bumping up the output of the camera flash...and got this shot.

Full disclosure I got more "oops" ...pictures I will never post....here than most shoots. The key of course is to continue to experiment with your set up and don't settle for average. Through trial and error I got ONE shot that I thought was different...at least from what I normally post.

With the exception of the algae at the back bottom of the tank...something I never have to worry about showing up under normal circumstances...I liked the effect. It sort of resembled sunlight coming down.

The biggest challenge I had here....all of the light that I used forced the camera to almost "squint" through the lens. I had to shoot at the lowest ISO, the highest aperture and the fastest shutter speed (1/320th) in order to cut the light. In addition, most of the flash units were set to at least half to quarter power.

...it's all about light, luck and practice.

I saw this post on the Swedish forum "ciklid.org" and it´s a very Interesting flash set up that obviously works very well. You´ve got some real stunning cichlids in that fishroom of yours.

I live the one of the eye peeking out!

It looks so complicated, but the results are amazing.