You tank is looking great! You van always drop in a fish or to
to help cycle the tank, and remove them later. I do that when
a tank will run empty for a while.

Looks great! Can´t wait to see some Tangs in there.

Did water changes on the other tanks and water tests on the new tank and...

I put a 3rd heater in there to try and get the temp up into the 80s. I think it would have happened a lot earlier, but I wasn't looking closely enough at the daggone thermometer (just going by the big green stripe on it) and was keeping it too cold.

This is the first time I've ever used a fishless cycle. It's the only way to go if you plan to stock an entire tank all at once. I'm feeling pretty confident a few good water changes week after next will have me ready to bring home all my new fish from the ACA.

And happy Sunday everybody!

Had a couple homemade margaritas and tried to re-scape the new tank again. Why is it so hard? Lol. Got frustrated and quit. I think I got lousy rocks.

I have the same problem with my rocks. The harder I try, the worse it looks.

I think my best aquascapes are when I first put the rocks in haphazardly and randomly in no order, with no thought.

Yea, you'd think it would be easy to achieve haphazardness, but no. It's not.

I know what you mean about the rocks.
If I move them around or take them out
I never seem to get them to look as good
as they did before I moved them!

Here's the latest aquascape. I think I might be close. I took a hammer to some of the rocks I just couldn't get to work otherwise. I showed them who the boss is. Lol 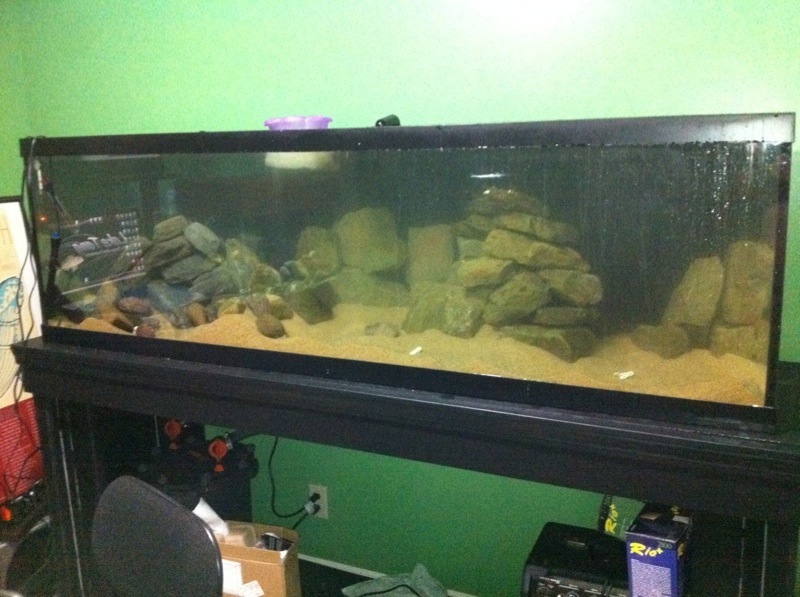 The round river rocks aren't really there they're just seed material for the cycle.

I made my wife do water tests after I got finished playing with the rocks last night. It's looking like the ammonia is going down nicely but the nitrites are off the charts now. Nitrates are still in the 5-10 range so it's working, but only slowly. Looks like a big water change tonight to get the nitrites down to a manageable level then jack the ammonia back up.

Fishless cycling is stressful when there's a definite date you're shooting for.

Here's the first pic with the lights on. The lights are a DIY idea I stole from Frank Mueller's web site using a T5 fixture placed in a rain gutter. I'm still up in the air on what kind of bulbs to buy as I'm really not in love with whatever these are that came with it. But at least there are lights. 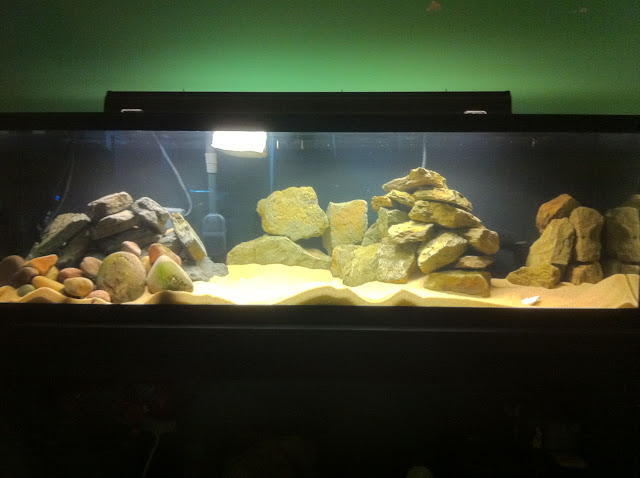 I still need to spend some time tightening up the light escaping from the bottom, but for a total cost of less than $50 I'm not complaining.

Cycle's done! And whew, just in time. I had too many nitrites last night so I did a big water change and added ammonia. Today when I got home no ammonia, no nitrites and 40ppm nitrates. Woohoo!

Cool! Now I hope you find some great fish to stock it with.

Lol yea me too. I'm getting nervous about getting what I want.

Did the last water change tonight to get ready for fish Sunday. Somewhere along the line I must have blown sand toward the inlet of the FX5 because when I started it up sure enough the impeller was making a racket. Had to tear it all down, clean out the sand and put it back together. Wouldn't have been bad, but it's 86 in my house right now. Ugh.

Good news, the filter just started back up and is operating silently once more. Woohoo!

I realized I'd been putting tank updates in Mike's ACA thread.

When I got home I realized I'd forgotten to turn the heater down on the tank and the temp was still in the 84 range so I floated the bags and did about a 10%-15% water change and replaced it with pure straight water. It came down to 82 so I figured that was OK as long as I acclimated everything to that temp.

First to go in was my 5 tester-fish, guppies. I got these after I set my 20 gallon up and lost a bunch of brichardi and an old julie I'd had for years. They did well so I went ahead and added the 7 multies from my 29 gallon. There should be enough shells for the 7, I ordered 78 whale eyes, 48 Japanese snails and also added the 25+ shells they had in the 29.

By that time the bags had floated enough so I put the new fish into a Rubbermaid tub with an airstone that was the same temp as the tank. Then I added some tank water because I had added 1/2 my normal mix of baking soda and epsom salts to the new tank before I left. Once they were acclimated and all the others still looked to be doing well I went ahead and put them in. All went well, the comps headed to the rocks and the xenos found the nice opoen sand area. After a while I went ahead and fed them and they ate like they hadn't eaten for a week (which was very nearly true I'm sure).

Strangely they all slept in the shell bed w/ the multies last night. In fact they're still hanging out there, or at least near there for the most part. Some of them seemed to be struggling in the current so I turned off my UGJ system and though they're not flipping in the current anymore they haven't yet come out of the same areas. I'm going to take it easy and maybe consider using the UGJs only for an hour or so a day to help clean the stuff up off the bottom.

Now though, the 29 looks empty with only two julies and one lone calvus. The shells being removed really left a hole so that'll be the next thing I work on. Here's some pics of the new tank: 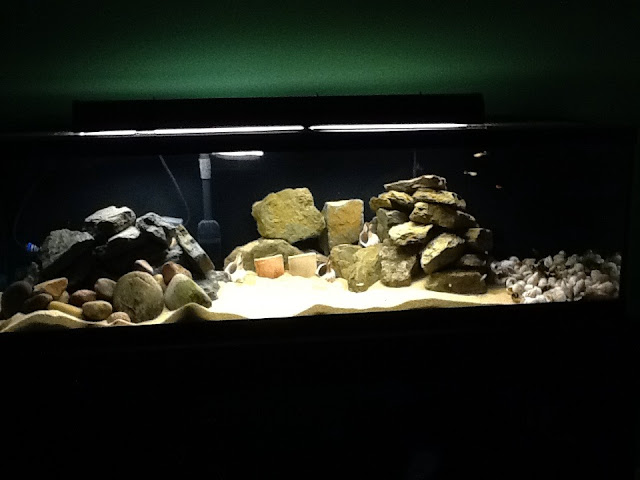 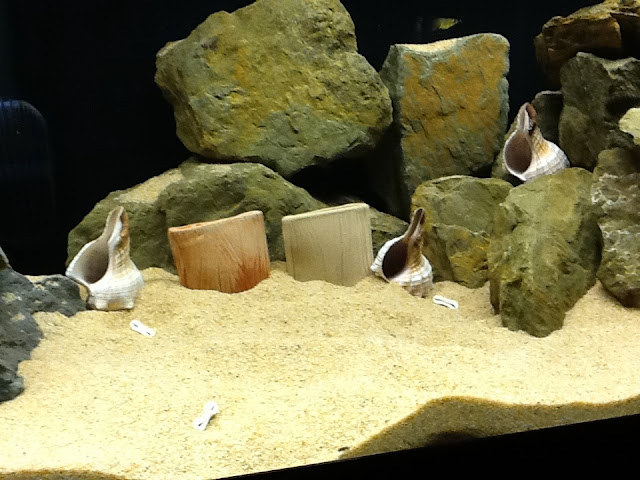 And the shell bed w/ a bunch of the comps visible and probably some of the xenos and multies too: 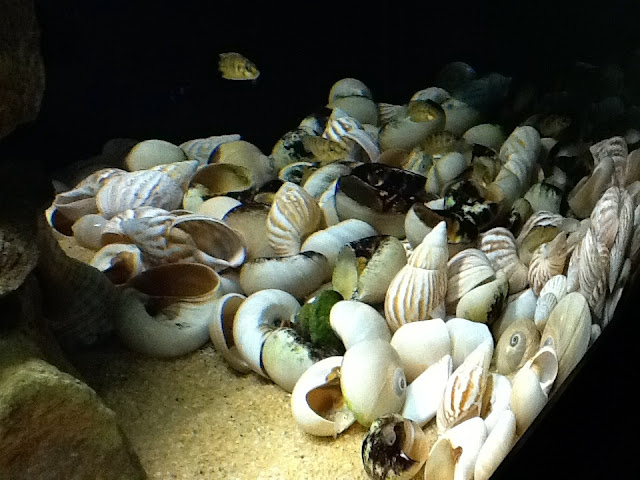 Tank looks really nice. I like the way the ends of the tank are darker than the center. It makes the shell bed look like a great place to hang out until they feel comfortable enough to get out and start exploring.

Thanks! I considered two 3' fixtures but I kind of like the varying amounts of light this way. My 20 gallon is like that because I bought the wrong LED fixture.

Here's a video of the new fish. Sorry about the music. It was let iMovie do it or have NCIS in the background.

Everybody seems to be doing well still. Still hanging out all on the right side of the tank w/ the shells for some reason though the comps are starting to use the rock pile.

I talked with Rare Dave today about ordering the rest of the fish for the 125. Right now I'm looking at 15-20 cyp leptosoma (bulu Point), 6 caudos and one gobie for the 125 and 6 nl. stappersii or meleagris (sp?), pearly occies whatever to replace the multies I took out of the 29 gallon.

Another guy from here is going to order some mbuna (probably demonasi) and split the shipping with me.

In other words, all is right with my world. Or will be in another week or so.

Enjoyed the video -- that one guppy looks like it's having a good time in there.

Thanks! The guppies just went crazy when I first put them in. They'd probably never had that much room to swim before and were *going* to take advantage of it.

It's all coming together nicely

! The tank looks good and the Altolamprologus compressiceps is one of my favorite Tangs. Compressiceps and calvus are so cool looking.

Norm, you've got an amazing setup there!!! The cyps are really going to set it off. Considering how delicate cyps are, I'd definitely get 20. They're great fish and add a lot of action to the tank as well as fill the upper third.

Swede, I agree on the alto lamps. In fact I just bought two more yellow calvus to go in my 29 gallon with the single that was already there. I can't stop buying fish!

Mike, yea I agree about the cyps. The number will depend on whether I go with paracyps too as they're both pretty pricey. I love watching fish grow up so this is definitely going to be awesome.